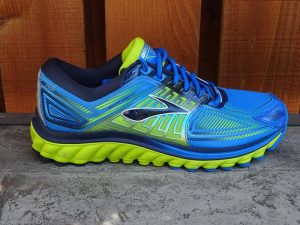 The Glycerin 13 is Brooks premier traditionally neutral runner boasting Super DNA cushioning technology which provides up to 25% more cushioning than its predecessor, giving a soft landing under foot for even the heavier striking runners. The 3D printed seamless upper reduces shearing, minimising the possibility of blistering in a properly fitted shoe and gives a mild support as it hugs the foot with the addition of the aptly named saddle wraps. Brooks claims the shoe to have ideal pressure zones throughout the outsole and a rounded heel which keeps the body in its ideal alignment. The body

will naturally find its best striking pattern to minimise metabolic cost if the individual is not trying to specifically follow a particular type of running techniques, therefore the idea of having ideal pressure zones is very much debatable as a concept.

Secondly, the rounded heel to keep the body in ideal alignment is also a questionable statement. The reasons for this is that:

So how did the wear-in of the shoe go?

* Each section is completed with as accurate as possible subjective information.

Review:
Subjective review:
The Glycerin 13 was a very comfortable neutral runner, if you have read my disclaimer on the Reviews page you will notice that most shoes I generally wear offer some type of medial posting or support. The shoe has a stiff midsole and heel counter with a beautiful sock liner cushion which feels amazing when you put them on your feet.
Subjectively over the 5 x 5km runs the shoe scored an 8.6/10 for me personally, the technologies faired similarly with a score of 8.1/10. It is not believed that either the weather or my mood at the time had an influence on the score provided however, mild niggles in the forefoot during the fourth and fifth run especially on the hills revealed a less than perfect feel. Additionally, rearfoot support was rated low due to the neutral nature of the footwear not providing much more than a firm heel counter.

Who the shoe would suit best:

The Brooks Glycerin 13 would best suit active people under approximately 100kg (try a Brooks Dyad for +100kg). The price point is suited to those who would prefer a runner with leisurely cushioning or an individual that takes their activity seriously. The curved last and neutral stance of the shoe indicated a less pronated foot would find this design more comfortable and width options in both male and female styles support this with standard B female and D male widths available.
Importantly it should be noted that at least a ½ size bigger than standard is required in most people due to the shape of the forefoot coming to a centre point and brushing against the medial side of the first toe.